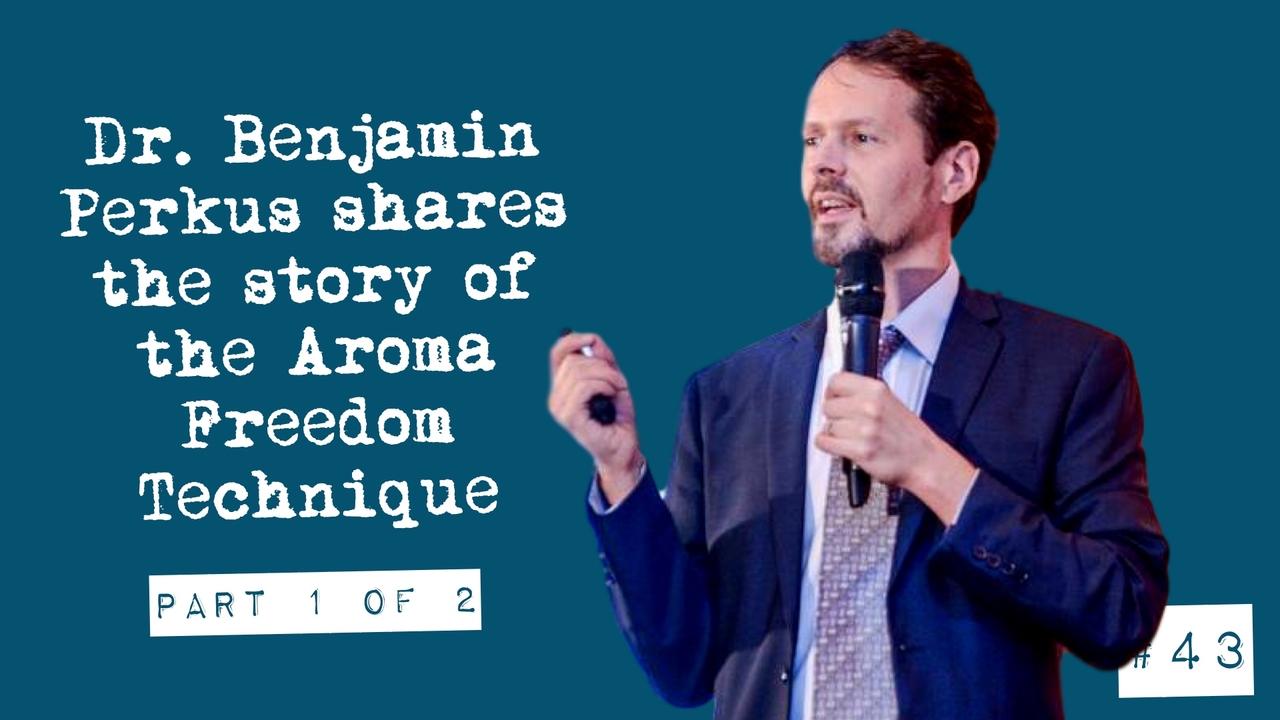 I’ll tell you from the beginning… this talk was so good that we had to split it in half. So, in part #1 I talk with Dr. Perkus (DP) about the Aroma Freedom Technique (AFT), where it came from, and how it began meandering it’s way like magic through the Young Living world.

DP has 20 years of clinical psychological experience. That’s his professional training. He loved it, never envisioned himself leaving it, and always thought he’d write a book about his practice some day.

Turns out, he worked extremely close to home. On the front porch, in fact. A few years into it, he and his wife built it out, creating an office near the front door of his home where he saw clients.

Now, he’s been into ground-breaking techniques since he began practicing two decades ago (things like EMDR, tapping, etc.). So, when essential oils came along in 2001, he was open to the possibilities.

Over time, their oil biz grew, and he says he was living a “dual life,” doing two things he equals loved. From his office on the front porch he was a practicing psychologist; from his kitchen table, he was an oiler. People were coming to the home for one OR the other constantly.

Fast forward to 2015. Young Living held the. International Grand Convention at the Gaylord in Dallas (I remember it well, as I spoke twice at this event!).

DP says he was speaking with his RCD spline one day and stated that he was “torn” between the two professions. He saw the power and efficacy of both- and the need for each of them. As a Platinum in YL with a growing biz, how could he and his wife choose?

Connie McDanel, the RCD, said to “create a tool.”

He decided that tool would be a book. He always thought he would write one. He’d just assumed it would be related to psychology- NOT essential oils. Further, he had NO IDEA it would involve BOTH- and that it would be in everyday language that anyone could understand-

… even if they DID NOT know psychology.

… even if they DID NOT know much about the oils…

Now, DP had been traveling (via YL) to teach about memories and trauma and other things he taught via psychology. He’d begun using essential oils to empower people towards healing…

In April 2016- almost a year after that convo with Connie- he decided he would jot a few notes while on a flight to Singapore. He came back and decided to churn out a book in time for the Aroma Share (read: vendor) event at convention, which was coming up in June!

(The notes were reflections on what he’d been doing, practical truths and applications he’d learn and observed in the trenches of real life and service to others!)

He decided to give himself a month to write….

… but 15 days in, he was still puling together notes and ideas.

He self-diagnosed that he had a “block,” so he used the techniques he was writing about on himself!

As you listen to the story, you’ll discover that he continued working ON HIMSELF as he worked THROUGH THE MATERIAL and created a manual others can use.

Now, there are mentoring programs, trauma help, 60-second resets, and even certifications to become licensed trainers…

Here’s the beauty of it all, though:

#1- DP pulled this from expertise in both clinical psychology AND essential oils.

#2- He wrote the essence of what he was doing, things that were proven techniques he developed to help others find emotional freedom.

#3- He tried the techniques on himself as he met various “blocks” along the journey of creating and releasing the program. That is, there’s something “meta” about how the entire AFT-thing came into being.

I love this about him ^^^, that he’s healthy AND he’s honest about being a work in progress. This is one of the first things you experience when you meet him… his genuine humility combined with a confidence that this tool will work.

#4- Anyone can use the technique. Though you have to be trained and certified to charge a fee (or to train others), everyone is encouraged- by DP himself- to implement the techniques for themselves AND for others.

First, it took a while to come up with the name. There was some question as to WHAT you call this. He talks about it in the podcast.

Second, all you need to put this into action is three oils… straight from your PSK. Frankincense. Lavender. Stress Away.

Links from the show

For videos from great leaders like this and others, go to OilyApp+ online- https://oilyapp.com/p/plus

Note: the February 2019 version of OilyApp+ features The Feelings Kit- you can find the info our the site.

Listening options for the show can be found at https://oilyapp.com/blog